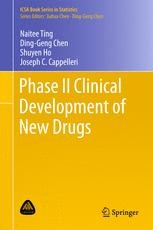 This book focuses on how to appropriately plan and develop a Phase II program, and how to design Phase II clinical trials and analyze their data. It provides a comprehensive overview of the entire drug development process and highlights key questions that need to be addressed for the successful execution of Phase II, so as to increase its success in Phase III and for drug approval. Lastly it warns project team members of the common potential pitfalls and offers tips on how to avoid them.

​Naitee Ting is a Fellow of ASA. He is currently a Director in the Department of Biostatistics and Data Sciences at Boehringer-Ingelheim Pharmaceuticals Inc. (BI).  He joined BI in September of 2009, and before joining BI, he was at Pfizer Inc. for 22 years (1987-2009).  Naitee received his Ph.D. in 1987 from Colorado State University (major in Statistics).  He has an M.S. degree from Mississippi State University (1979, Statistics) and a B.S. degree from College of Chinese Culture (1976, Forestry) at Taipei, Taiwan.  Naitee published articles in Technometrics, Statistics in Medicine, Drug Information Journal, Journal of Statistical Planning and Inference, Journal of Biopharmaceutical Statistics, Biometrical Journal, Statistics and Probability Letters, and Journal of Statistical Computation and Simulation.  His book "Dose Finding in Drug Development" was published in 2006 by Springer, and is considered as the leading reference in the field of dose response clinical trials.  The book "Fundamental Concepts for New Clinical Trialists", co-authored with Scott Evans, was published by CRC in 2015.  Naitee is an adjunct professor of Columbia University, University of Connecticut and University of Rhode Island.  Naitee has been an active member of both the American Statistical Association (ASA) and the International Chinese Statistical Association (ICSA).
Professor Ding-Geng Chen is a fellow of the American Statistical Association and currently the Wallace Kuralt distinguished professor at the University of North Carolina at Chapel Hill, USA, and an extraordinary professor at University of Pretoria, South Africa. He was a professor at the University of Rochester and the Karl E. Peace endowed eminent scholar chair in biostatistics at Georgia Southern University. He is also a senior consultant for biopharmaceuticals and government agencies with extensive expertise in clinical trial biostatistics and public health statistics. Professor Chen has written more than 150 referred publications and co-authored/co-edited twelve books on clinical trial methodology with R and SAS, meta-analysis using R, advanced statistical causal-inference modeling, Monte-Carlo simulations, advanced public health statistics and statistical models in data science.

Shuyen Ho received his PhD in Statistics from University of Wisconsin – Madison, and his Bachelor in Applied Mathematics from Taiwan. Dr. Ho is a Biostatistics Director at PAREXEL International in Durham, North Carolina and has worked in the pharmaceutical industry for over 25 years. Prior to PAREXEL, he was a Clinical Statistics Director at GlaxoSmithKline (GSK) and Group Leader at Merck. He specializes in Phase II & III clinical development and has helped developed widely used respiratory medicines such as Claritin, Advair and Veramyst.

Joseph C. Cappelleri earned his MS in statistics from the City University of New York (Baruch College), PhD in psychometrics from Cornell University, and MPH in epidemiology from Harvard University. Dr. Cappelleri is a senior director of biostatistics at Pfizer Inc. He has also served on the adjunct faculties at Brown University, Tufts Medical Center, and the University of Connecticut. A Fellow of the American Statistical Association, he has delivered numerous conference presentations and published extensively on clinical and methodological topics, including regression-discontinuity designs, meta-analysis, and health measurement scales. Dr. Cappelleri is the lead author of the book “Patient-Reported Outcomes: Measurement, Implementation and Interpretation.”

“It provides a hands-on approach to each subject, and the necessary statistical background is presented in the most non-mathematical way possible. … Throughout the book, the scope of each subject is well defined, and if the reader has the need for further support, useful references are helpfully recommended. … I would strongly recommend this book to anyone working in clinical development or with an interest in this field, regardless of their background.” (David Manteigas, ISCB News, iscb.info, Issue 65, June, 2018)