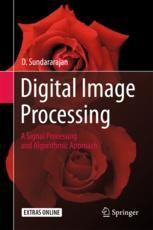 A Signal Processing and Algorithmic Approach

This book offers readers an essential introduction to the fundamentals of digital image processing. Pursuing a signal processing and algorithmic approach, it makes the fundamentals of digital image processing accessible and easy to learn. It is written in a clear and concise manner with a large number of 4 x 4 and 8 x 8 examples, figures and detailed explanations. Each concept is developed from the basic principles and described in detail with equal emphasis on theory and practice. The book is accompanied by a companion website that provides several MATLAB programs for the implementation of image processing algorithms. The book also offers comprehensive coverage of the following topics: Enhancement, Transform processing, Restoration, Registration, Reconstruction from projections, Morphological image processing, Edge detection, Object representation and classification, Compression, and Color processing.

Dr. D. Sundararajan obtained his Ph.D. in Electrical Engineering at Concordia University, Montreal, Canada in 1988. He is the author of four books. As the principal inventor of the latest family of discrete Fourier transform (DFT) algorithms, he holds three patents (which have been granted by the US, Canada and Britain). Further, he has published several papers in IEEE Transactions and in the Proceedings of IEEE Conference. He has taught undergraduate and graduate classes in digital signal processing, digital image processing, engineering mathematics, programming, operating systems and digital logic design at Concordia University, Canada, Nanyang Technological University, Singapore, and Adhiyamaan College of Engineering, India. He has conducted workshops on Digital image processing, MATLAB and LaTeX.

Over the course of his engineering career, he has held positions at the National Aerospace Laboratory, Bangalore, and the National Physical Laboratory, New Delhi, where he worked on the design of digital and analog signal processing systems. Dr. Sundararajan holds a B.E. in Electrical Engineering from Madras University and an M.Tech in Electrical Engineering from the Indian Institute of Technology Chennai (IIT Chennai).

“This textbook treats the topic from the very practical point of view, using a signal processing and algorithmic, approach. This means plenty of numerical examples, figures, tables, and algorithms, and no theorems and proofs. Such an approach makes the book easy to follow by a reader. … This textbook is intended for engineers and computer science professionals. It can be useful for undergraduate and graduate level courses, and for self-study.” (Agnieszka Lisowska, zbMATH 1392.94002, 2018)