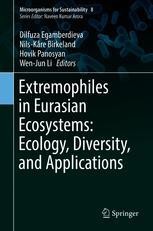 This book explores various aspects of thermophilic and halophilic microbes from Eurasian ecosystems, which have proved to offer a unique reservoir of genetic diversity and biological source of extremophiles. It also covers the biotechnological uses of extremophiles, and their potential use in agricultural and industrial applications. The topics addressed include but are not limited to: diversity and microbial ecology, microbe-environment interactions, adaptation and evolution, element cycling and biotechnological applications of thermophiles and halophiles in Eurasian ecosystems.

In order to review the progress made in biology and biotechnological applications of thermophiles and halophiles, the book combines review papers and results of original research from various specialists and authorities in the field. It includes several chapters describing the microbial diversity and ecology of geothermal springs distributed among the territory of various Eurasian countries, such as Armenia, Bulgaria, China, Georgia, India, Italy, Pakistan and Turkey. A dedicated chapter discusses selected aspects of thermophilic chemolithotrophic bacteria isolated from mining sites (sulfide ores); detailed descriptions of various thermophile microbes isolated from high-temperature environments and their biotechnological potential are also provided. Subsequent chapters describe the diversity and ecology of halophilic microbes harbored in saline and hypersaline lakes in Iran, Turkey and China; soil and plant microbiomes in saline arid lands of Uzbekistan; microbial diversity in Asian deserts; and the potential applications of thermophilic and halophilic microbes as exopolysaccharide (EPS) producers, focusing on the chemistry and applications of the EPS they produce.

We hope that this book will prove valuable as an up-to-date overview of the current state of research on Eurasian extremophiles in general and thermophiles and halophiles in particular. Many questions remain unanswered, and we hope that it will stimulate further studies in this intriguing and promising field.
Show all
About the authors

Dr. Dilfuza Egamberdieva graduated with a degree in Biology from the National University of Uzbekistan in 1993. She received her PhD in Agricultural Sciences from the Humboldt University of Berlin, Germany in 2000. She pursued her postdoctoral studies at the Helsinki University of Finland (2001, 2008), University of Florence, Italy (2003), Manchester Metropolitan University, UK (2006), Leiden University of Netherlands (2007), and Leibniz Centre for Agricultural Landscape Research, Germany (2014-2017). In 2009, she established the research laboratory “Plant Microbe Interactions” at the National University of Uzbekistan. For her outstanding academic achievements she received numerous fellowship and awards including the UNESCO-L’OREAL Fellowship for Women in Science (2006), IUBMB Young Scientist Award (2006), ASM Morrison Rogosa Award (2006), UNESCO-MAB Award (2005), Alexander Von Humboldt Fellowship (2014) and in 2012 the TWAS Prize in Agricultural Sciences for her innovative contributions to the study of plant-microbe interactions in stressed environments. She has produced over 80 peer-reviewed publications in international journals and 40 chapters.

Dr. Nils-Kåre Birkeland graduated with a degree in Microbiology from the University of Bergen (Norway), and received his Dr. philos. degree in Molecular Microbiology from the University of Oslo (Norway) in 1992. He also has work experience at the NTNU (Norway), University of Tromsø (Norway), Norwegian University of Life Sciences, and from sabbaticals in USA. From 1996 he has been a Professor of Microbiology at the University of Bergen. His main research areas during the last 20 years have been anaerobic microbiology, extremophiles and microbial biotechnology. He has isolated and described a number of novel taxa of extremophiles and analysed the molecular mechanisms for high-temperature adaptations and diversity in extreme environments.  He has published 97 papers in peer-reviewed journals and 3 book chapters, and has coordinated a number of international higher educational/research networks and projects.

Dr. Hovik Panosyan graduated with a degree in Biology from Yerevan State University (YSU) in 1999. He received his Ph.D in microbiology from the Institute of Botany of NAS of Armenia in 2003. He has been a faculty member at YSU since 2002 and was promoted to Associate Professor in 2011. His main research areas are Microbial Ecology and Biology of Extremophilic Microbes. He has received numerous research fellowships and awards including the FEBS Short-Term Fellowship (2009 and 2004), FEMS Research Fellowship (2009), NFSAT (2011) DAAD (2013) and has participated in international research together with American, European and Asian  partners in the context of CRDF and Norwegian SIU grants. He is currently coordinator and leader of international research and educational programs, as well as ISME ambassador of Armenia. He has work experience at the University of Bergen (Norway), LMU Munich (Germany), University of Nevada, Las Vegas (USA) and Institute of Biomolecular Chemistry Naples (Italy). He has published more than 45 research papers in peer-reviewed journals, 2 books and 18 chapters.

Dr.Wen-Jun Li received his Ph.D in Microbiology from the Institute of Applied Ecology, Chinese Academy of Sciences in 2002. He has been head of the Actinobacterial Research Group and Vice Director of Yunnan Institute of Microbiology, Yunnan University, China since January of 2009, and Vice Dean of School of Life Sciences, Yunnan University, China since January of 2012, and currently works as a Distinguished Professor at the School of Life Sciences, Sun Yat-Sen University, Guangzhou, China. He has written three monographs and more than 610 publications and holds more than 15 authorized patents. He has been appointed an editorial board member of 7 peer-reviewed journals and was invited to be a reviewer for over 20 international journals. He was awarded the WFCC (The World Federation for Culture Collections) Skerman Award for Microbial Taxonomy in 2007, and five other provincial level awards in 2005, 2007, 2009, 2010 and 2013, respectively, for his outstanding research achievements in microbial systematics. He has served as a member of the suborder Micrococcales International Committee on Systematics of Prokaryotes (ICSP) since 2008 and Charter Member of Bergey’s International Society for Microbial Systematics (BISMiS) from 2011.