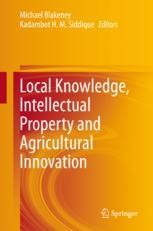 Professor Blakeney has an international reputation in intellectual property and agriculture. He has worked as a consultant with the Food and Agricultural Organization of the United Nations, the World Intellectual Property Organization, the European Commission, European Patent Office and with the governments of countries in Africa, Asia, Australasia and Central and South America. He is the author of 22 books and has published more than 200 refereed articles and book chapters. He holds a number of national and international committee and editorial board positions.

He has directed EC projects concerned with the establishment of an IP infrastructure in a number of new EU Member States and EU Applicant States. He has also directed and been a short-term expert in a number of projects to assist developing countries to become members of the World Trade Organization.

His most recent book Food Loss and Waste. Causes and Solutions (2019) was awarded the Australian Institute of Food Sciences and Technology, Bruce Chandler Prize.

Professor Dr Kadambot Siddique is the Hackett Professor of Agriculture Chair and Director of The University of Western Australia’s Institute of Agriculture. Professor Siddique has an international reputation in agricultural science especially in the fields of crop physiology, production agronomy, farming systems, genetic resources, breeding research in cereal, grain and pasture legumes and oilseed crops.  He has published more than 450 scientific papers and book/book chapters. Professor Siddique is the highly cited Researcher in agricultural science (Web of Science). He has trained numerous Masters, PhD students and postdoctoral Fellows from more than 30 countries.

Because of Professor Siddique’s personal research and with others with whom he collaborates, Australia has become one of the major grain legume exporting nations in the world. His pioneering research on chickpea has contributed enormously to the Australian chickpea industry..

He is a visiting Professor in a number of overseas universities. Professor Siddique has developed an extensive network of scientists within Australia and has also established a diverse range of overseas (China, India, Turkey, Syria, Iraq, Iran, Saudi Arabia, Oman, Malaysia,  Timor-Leste, Nepal, Bangladesh, Pakistan, Europe, Canada, USA) collaborative research and educational projects. He holds a number of national and international committee and editorial board positions.

He is a Fellow of the Australian Academy of Technological Sciences and Engineering, African Academy of Sciences, Australian Institute of Agriculture and Indian National Academy of Agricultural Sciences. Professor Siddique was the UN FAO Special Ambassador for the International Year of Pulses 2016, and is the recipient of national and international awards including: Friendship Award-2019 from the Chinese Government, Urrbrae Memorial Award, Member of the Order of Australia (AM), 2014 Western Australian Year of the Award (CitWA) and the Dunhunag Award by China's Gansu Provincial Government.