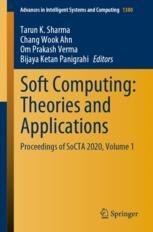 This book focuses on soft computing and how it can be applied to solve real-world problems arising in various domains, ranging from medicine and healthcare, to supply chain management, image processing and cryptanalysis. It gathers high-quality papers presented at the International Conference on Soft Computing: Theories and Applications (SoCTA 2020), organized online. The book is divided into two volumes and offers valuable insights into soft computing for teachers and researchers alike; the book will inspire further research in this dynamic field.

Dr. Tarun Kumar Sharma holds Ph.D. in Soft Computing in 2013 from IIT Roorkee. Since June 2020, he is associated with Shobhit University, Gangoh, Saharanpur as a Professor  & Head of CSE and Dean – School of Engineering & Technology. Earlier he worked with Amity University Rajasthan as an Associate Professor & Head – Department of Computer Science & Engineering / IT as well as Alternate Director – Outcome. He has supervised 2 Ph.D., 7 M.Tech Dissertations, several MCA and B.Tech Projects. He has over 80 research publications in his credit. He has been to Amity Institute of Higher Education Mauritius on deputation. He has availed grants from Microsoft Research India, CSIR, New Delhi and DST New Delhi to visit Australia; Singapore and Malaysia respectively. He is a founding member of International Conference on Soft Computing: Theories and Applications (SoCTA Series) and Congress on Advances in Materials Science and Engineering (CAMSE). He has edited 5 volumes of Conference Proceedings published by AISC series of Springer (SCOPUS) Publication and two edited books with Asset Analytics, Springer.

Prof. Chang Wook Ahn received the Ph.D. degree from the Department of Information and Communications, GIST, in 2005. From 2005 to 2007, he was with the Samsung Advanced Institute of Technology, South Korea. From 2007 to 2008, he was a Research Professor at GIST. From 2008 to 2016, he was an Assistant/Associate Professor with the Department of Computer Engineering, Sungkyunkwan University (SKKU), South Korea. He is currently a Director of MEMI (Meta-Evolutionary Machine Intelligence) Lab and a Professor with the School of Electrical Engineering and Computer Science, Gwangju Institute of Science and Technology (GIST), South Korea. His research interests include genetic algorithms/programming, multi-objective optimization, evolutionary neural networks, and quantum machine learning. He has been Guest Edited various thematic issues in Journal of repute.

Dr. Om Prakash Verma is presently associated with Dr. B R Ambedkar National Institute of Technology Jalandhar, Punjab, India since January 2018 as an Assistant Professor in the Department of Instrumentation and Control Engineering. He has almost 11 years of teaching experience. He did his Ph.D. from IIT Roorkee, M.Tech. from Dr. B R Ambedkar NIT Jalandhar and B.E. from Dr. B R Ambedkar University Agra. He is presently working on ISRO Sponsored Project as a PI. He has edited a book on Soft Computing: Theories and Applications and has been a potential reviewer of several International Journals of high repute. He has published more than 30 research papers in SCI/Scopus/ESI indexed Journals. He has published recently published a paper in Renewable & Sustainable Energy Reviews, (IF: 12.110). He has guided 4 M.Tech Students and supervising 6 PhD Students.

Prof. Bijaya Ketan Panigrahi is a Professor in the Department of Electrical Engineering, Indian Institute of Technology Delhi. His research interests include the security of cyber physical systems, digital signal processing, and soft computing applications to power systems. Prof. Panigrahi received a Ph.D. in electrical engineering. He is an associate editor for IEEE Systems Journal and a Senior Member of the IEEE. Prof. Panigrahi was elected Fellow of INAE in 2015. He is in teaching and research profession since 1990. He has published more than 500 Journals Articles in Journals of high repute. He has edited several conference proceedings with publishers of repute like Springer. He has file more than 6 patents. As per the Google Scholar his H-Index is 55 with more than 12650 Citations and CrossRef is above 7550.  His research interest includes Power System Planning, Operation and Control, Machine Intelligence and Evolutionary Computing.