Lecture Notes in Networks and Systems 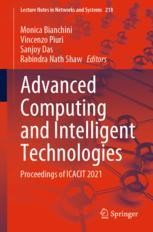 Monica Bianchini received the Laurea cum laude in Mathematics and the Ph.D. degree in Computer Science from the University of Florence, Italy, in 1989 and 1995, respectively. After receiving the Laurea, for two years, she was involved in a joint project of Bull HN Italia and the Department of Mathematics (University of Florence), aimed at designing parallel software for solving differential equations. From 1992 to 1998, she was a Ph.D. student and a Postdoc Fellow with the Computer Science Department of the University of Florence. Since 1999, she has been with the University of Siena, where she is currently Associate Professor at the Information Engineering and Mathematics Department. Her main research interest is in the field of artificial intelligence & applications, machine learning, with emphasis on neural networks for structured data and deep learning, approximation theory, information retrieval, bioinformatics, and image processing. M. Bianchini has authored more than seventy papers and has been Editor of books and special issues on international journals in her research field. She has been a participant in many research projects focused on machine learning and pattern recognition, founded by both Italian Ministry of Education (MIUR) and University of Siena (PAR scheme), and she has been involved in the organization of several scientific events, including the NATO Advanced Workshop on Limitations and Future Trends in Neural Computation (2001), the 8th AI*IA Conference (2002), GIRPR 2012, the 25th International Symposium on Logic-Based Program Synthesis and Transformation, and the ACM International Conference on Computing Frontiers 2017. Prof. Bianchini served as  Associate Editor for IEEE Transactions on Neural Networks (2003-09), Neurocomputing (from 2002), and Int. J. of Computers in Healthcare (from 2010). She is Permanent Member of the Editorial Board of IJCNN, ICANN, ICPR, ICPRAM, ESANN, ANNPR, and KES.

Vincenzo Piuri is Professor at the University of Milan, Italy (since 2000). He was Associate Professor at Politecnico di Milano, Italy, Visiting Professor at the University of Texas at Austin, USA, and  Visiting Researcher at George Mason University, USA. He has founded a start-up company in the area of intelligent systems for industrial applications and is active in industrial research projects. He received his M.S. and Ph.D. in Computer Engineering from Politecnico di Milano, Italy. His main research and industrial application interests are artificial intelligence, intelligent systems, computational intelligence, pattern analysis and recognition, machine learning, signal and image processing, biometrics, intelligent measurement systems, industrial applications, distributed processing systems, Internet of things, cloud computing, fault tolerance, application-specific digital processing architectures, and arithmetic architectures. He published over 400 papers in international journals, international conference proceedings, and books. He is Fellow of the IEEE and Distinguished Scientist of ACM. He has been IEEE Vice President for Technical Activities (2015), Member of the IEEE Board of Directors (2010–2012, 2015), and President of the IEEE Computational Intelligence Society (2006–2007). He is Editor-in-Chief of the IEEE Systems Journal (2013–2019).

Rabindra Nath Shaw is a Senior Member of IEEE (USA), currently holding the post of Director, International Relations, Galgotias University India. Dr. Shaw is an alumnus of the applied physics department, University of Calcutta, India. . He has more than eleven years of teaching experience in leading institutes like Motilal Nehru National Institute of Technology Allahabad, India, Jadavpur University, and others at UG and PG level. He has successfully organized more than fifteen International conferences as Conference Chair, Publication Chair, and Editor. He has published more than hundred Scopus/ WoS/ ISI indexed research papers in International Journals and Conference Proceedings. He is the editor of several Springer and Elsevier books. His primary area of research is optimization algorithms and machine learning techniques for power systems, IoT applications, Renewable Energy, and Power electronics converters. He also worked as University Examination Coordinator, University MOOC’s Coordinator, University Conference Coordinator, and Faculty- In Charge, Centre of Excellence for Power Engineering and Clean Energy Integration.