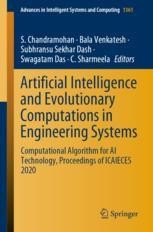 This book gathers selected papers presented at the 6th International Conference on Artificial Intelligence and Evolutionary Computations in Engineering Systems, held at the Anna University, Chennai, India, from 20 to 22 April 2020. It covers advances and recent developments in various computational intelligence techniques, with an emphasis on the design of communication systems. In addition, it shares valuable insights into advanced computational methodologies such as neural networks, fuzzy systems, evolutionary algorithms, hybrid intelligent systems, uncertain reasoning techniques, and other machine learning methods and their application to decision-making and problem-solving in mobile and wireless communication networks.

Dr. BalaVenkatesh is the founding academic director of the Centre for Urban Energy (CUE) at Ryerson University. He is also Tenured Professor in the Department of Electrical and Computer Engineering. He specializes in electric power systems with interests in transmission and distribution systems, renewables, energy storage and smart grids. He works with industry partners such as Hydro One, Toronto Hydro, the Independent Electricity System Operator (IESO), Schneider Electric, eCAMION, Temporal Power, Alectra Utilities and Tata Power Delhi Distribution Limited. In total, his extramural funding is over $18 million. In the last two decades, he has worked on over 30 consulting and research projects in India and Canada. With a Ph.D. from Anna University (India), Dr. Venkatesh is a registered professional engineer in Ontario, Canada. Since 1994, he has also taught at the University of New Brunswick, Multimedia University (Malaysia) and Anna University. Dr. Venkatesh has published over 230 journal papers, conference papers, technical reports and book chapters. He has supervised over 60 M.A.Sc., Ph.D. and PDF candidates.

Dr. S. Chandramohan is the founding director of the Anna University - Ryerson University Urban Energy Centre at Anna University, Chennai. He is also Professor and Head of Electrical and Electronics Engineering department in Anna University. He is specialized in electric power systems with interests in energy management, smart energy storage systems and smart microgrids. He works with industry and utility partners in Tamil Nadu. He has guided six Ph.D. students and involved in consulting and research projects in India.  Dr. S. Chandramohan has published over 30 journals and conference papers. He is also instrumental in starting a unique AICTE approved postgraduate programme in “Power Engineering and Management” since 2013 at Anna University with an intake of 25 students.

Dr. Subhransu Sekhar Dash is currently working as Professor and Head of Electrical Engineering at Government College of Engineering, Keonjhar, Odisha. He is specialized in electric power systems with interests in smart grid, energy management, power system operation and control, AI techniques and power converters.. He has guided twenty-five Ph.D. students and involved in consulting and research projects in India.  He has published over 250 manuscripts in peer-reviewed journal and international conference. He is a visiting research scholar of Le Havre University, France, and University of Wisconsin, Milwaukee, USA, and Visiting Professor at Francois Rabelais University, POLYTECH, Tours, France. He is an author of three books and published more than 20 chapters in Springer series. He obtained his Ph.D. degree from Anna University, Chennai, in the year 2006, master’s degree from UCE, Burla, Odisha, in 1996, and graduation degree from Institution of Engineers, India, in the year 1994. He is having more than 22 years of teaching and research experience. He is Member of IEEE, Institution of Engineers (India), and Life Member of ISTE.

Dr. Swagatam Das is currently serving as Associate Professor at the Electronics and Communication Sciences Unit of the Indian Statistical Institute, Kolkata, India. His research interests include evolutionary computing, pattern recognition, multi-agent systems and wireless communication. Dr. Das has published more than 300 research articles in peer-reviewed journals and international conferences. He is the founding co-editor-in-chief of Swarm and Evolutionary Computation, an international journal from Elsevier. He has also served as or is serving as the associate editors of the several reputed international journals. Dr. Das has 18,000+ Google Scholar citations and an H-index of 63 till date. He is the recipient of the 2012 Young Engineer Award from the Indian National Academy of Engineering (INAE). He is also the recipient of the 2015 Thomson Reuters Research Excellence India Citation Award as the highest cited researcher from India in Engineering and Computer Science category between 2010 and 2014.

Dr. C. Sharmeela is Associate Professor and Professor-In-Charge, Power Engineering and Management, Department of Electrical and Electronics Engineering at C.E.G., Anna University, Chennai. She was also the assistant director, Centre for Entrepreneurship Development, C.E.G., Anna University, Chennai, during 2015–2018. She has done a number of consultancies for power quality measurements and design of compensators for industries. She has received in the year 2011 a grant from CTDT, Anna University, for a two-year project on “Energy Efficient Solar Based Lighting System for Domestic Application”. She has authored over 30 journal papers in refereed international journals and more than 60 papers in international and national conferences. Her areas of interest include power quality, power electronics applications to power systems, smart grid, energy storage systems and renewable energy systems. She is Fellow of the Institution of Engineers (India) and Life Member of ISTE, Central Board of Irrigation and Power (CBIP), New Delhi, India, and SSI, India. She has a teaching/research and consultancy experience of 18 years in the areas of power quality and power systems.