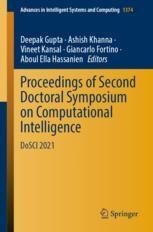 Dr. Deepak Gupta is an eminent academician and plays versatile roles and responsibilities juggling between lectures, research, publications, consultancy, community service, Ph.D. and post-doctorate supervision, etc. With 13 years of rich expertise in teaching and two years in industry; he focuses on rational and practical learning. He has contributed massive literature in the fields of human–computer interaction, intelligent data analysis, nature-inspired computing, machine learning and soft computing. He is working as Assistant Professor at Maharaja Agrasen Institute of Technology (GGSIPU), Delhi, India. He has served as Editor-in-Chief, Guest Editor, Associate Editor in SCI and various other reputed journals. He has authored/edited 44 books with national/international level publishers. He has published 140 scientific research publications in reputed international journals and conferences including 68 SCI indexed journals. He has also filed 3 patents.
Dr. Ashish Khanna has 16 years of rich expertise in teaching, entrepreneurship and research & development. He received his Ph.D. degree from National Institute of Technology, Kurukshetra. He has completed his M.Tech. and B.Tech. at GGSIPU, Delhi. He has completed his postdoc from Internet of Things Lab at Inatel, Brazil, and University of Valladolid, Spain. He has published around 61 SCI indexed papers in IEEE Transaction, Springer, Elsevier, Wiley and many more reputed journals with cumulative impact factor of above 160. He has around 120 research articles in top SCI/Scopus journals, conferences and book chapters. He is the co-author of around 30 edited and textbooks. His research interest includes MANET, FANET, IoT, machine learning and many more. He has served in the research field as Keynote Speaker/Faculty Resource Person/Session Chair/Reviewer/TPC Member/ Post-doctorate supervision. He is Convener and Organizer of ‘ICICC’ and ICDAM conference series. He has 3 published patents to his credit.
Prof. (Dr.) Vineet Kansal studied at Indian Institute of Technology, Delhi, and is currently working as Professor with Institute of Engineering & Technology, Dr. A.P.J. Abdul Kalam Technical University, Lucknow. He was awarded appreciation by NPTEL, IIT Kanpur & Centre of Continuing education, IIT Kanpur for inspiring the faculty members and students of higher technical education to adopt NPTEL Online certification courses for evangelizing its modus operandi and for conceptualizing online & offline blended faculty training programs addressing pedagogical issues in engineering education in the state of Uttar Pradesh, India.
Prof. (Dr.) Giancarlo Fortino (giancarlo.fortino@unical.it) is Full Professor at the University of Calabria (Unical), Italy. He is a director of the Smart, Pervasive, and Mobile Systems Engineering lab at Unical as well as a co-chair of joint labs to study the Internet of things (IoT) that were established between Unical and Wuhan University of Technology, Southern Medical University and Huazhong Agricultural University in China. In addition, he is a co-founder and a chief executive officer of SenSysCal, a Unical spinoff focused on innovative IoT systems. His research interests include agent-based computing, wireless (body) sensor networks and IoT.
Prof. (Dr.)  Aboul Ella Hassanein is Founder and Head of the Egyptian Scientific Research Group (SRGE). Hassanien has more than 1000 scientific research papers published in prestigious international journals and over 50 books covering such diverse topics as data mining, medical images, intelligent systems, social networks and smart environment. Prof. Hassanien won several awards including the Best Researcher of the Youth Award of Astronomy and Geophysics of the National Research Institute, Academy of Scientific Research (Egypt, 1990). He was also granted a Scientific Excellence Award in Humanities from the University of Kuwait for the 2004 Award and received the superiority of scientific - University Award (Cairo University, 2013). Also, he was honored in Egypt as the best researcher at Cairo University in 2013.  He has also received the Islamic Educational, Scientific and Cultural Organization (ISESCO) prize on Technology (2014) and received the State Award for Excellence in Engineering Sciences 2015.