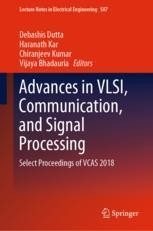 This book comprises select proceedings of the International Conference on VLSI, Communication and Signal processing (VCAS 2018). It looks at latest research findings in VLSI design and applications. The book covers a wide range of topics in electronics and communication engineering, especially in the area of microelectronics and VLSI design, communication systems and networks, and image and signal processing. The contents of this book will be useful to researchers and professionals alike.

Dr. Debashis Dutta obtained his Masters from the Electrical Engineering department of Indian Institute of Technology, Delhi and his PhD in Electronics and Electrical Communication Engineering from Indian Institute of Technology, Kharagpur. He worked as Scientist G and Group Coordinator (R&D in Electronics Group) in the Ministry of Electronics and Information Technology (MeitY), Government of India. Dr. Dutta has also worked as Programme Director for Special Manpower Development Program (SMDP) in VLSI Design. He was the Director in the board of NICSI, a society under National Informatics Centre and Governing Council member in several R&D institutions. Currently, he works as a consultant for various academic institutions and electronics manufacturing industries. His research interests include low-power analog circuit design, biomedical electronics and neural networks.

Dr. Haranath Kar received his Bachelors from Bengal Engineering College, Shibpur (now IIEST) in 1989, his Masters from Banaras Hindu University, Varanasi in 1992 and his PhD from the University of Allahabad in 2000. After spending a brief period at the Defence Research and Development Organization as Scientist B, he joined Motilal Nehru National Institute of Technology (MNNIT), Allahabad, India, as a Lecturer in 1991, where he became an Assistant Professor in 2001, Associate Professor in2006 and Professor in 2007. He spent two years at the Atilim University, Turkey (2002-2004) as an Assistant Professor. He was Head of Electronics and Communication Engineering Department at MNNIT during 2013-2015. His current research interests include digital signal processing, nonlinear dynamical systems, delayed systems, robust stability, guaranteed cost control, and multidimensional systems. He is a recipient of the 2002-2003 IEE Heaviside Premium Award. He was conferred with the D.N. Agrawal Award of excellence and the Bharat Vikas Award in 2005 and 2017, respectively. He is also a member of editorial board of the Mathematical Problems in Engineering.

Dr. Chiranjeev Kumar received his Bachelors in Telecommunication Engineering from Banglore University, his Masters in Computer Science, and his PhD from MNNIT Allahabad. Currently, he is a professor in the Department of Computer Science & Engineering, Indian Institute of Technology (IIT-ISM), Dhanbad, India. His research interests include wireless networks, software engineering, mobility management, and cognitive radio networks. He has published more than 100 articles in international journals and conferences proceedings. Dr. Kumar has also contributed several books and book chapters on wireless communication and networking, and he has worked as an ad hoc reviewer of many international journals.

Dr. Vijaya Bhadauria received her Bachelors (Electronics) and Masters (Control & Instrumentation), and her PhD in Electronics Engineering from MNNIT Allahabad. At present, she is Professor and Head in the Department of Electronics & Communication Engineering, MNNIT Allahabad. Her major research interests include VLSI circuits and system, digital integrated circuit design, advanced analog integrated circuit design, VLSI technology and Semiconductor Device and Modeling. She has published many papers in international journals and proceedings, and has also acted as an ad hoc reviewer of many international journals.