What is MySQL NDB Cluster?

MySQL is most famous for its Server product using the InnoDB storage engine for the back-end storage. However, MySQL uses an architecture that allows for pluggable storage engines, so there are other options. The NDB storage engine is the most notable.

The MySQL NDB engine dates back to the 1990s when it was first developed as the Network DataBase (NDB) by Mikael Ronström (who is still a MySQL Cluster developer) while he was with Ericsson. Focus was originally on the database requirements of the telecom industry in performing tasks such as the routing of phone calls. Ericsson later split NDB out to it’s a virtual company, Alzato, which MySQL acquired in 2003.

It is after that acquisition in 2003 that the pluggable storage engine API comes into play. It allowed MySQL to create an SQL front end to what otherwise could only be accessed using the C++ NDB API. Thus, MySQL NDB Cluster was born! (The actual product name is MySQL Cluster, but MySQL NDB Cluster is used here for clarity to avoid confusion with MySQL InnoDB Cluster and other clustered MySQL solutions).

So why bother about NDB Cluster when MySQL also has the excellent InnoDB storage engine? The answer lies in the need for high availability. The telecom industry demands high availability – after all it is not good for their business when phone calls cannot be routed. The NDB database was designed from day one to be highly available. In this context, the sense of “highly available” is extended to include stable query execution times. The answer was to make NDB a distributed (thus the network part of the name), in-memory database. The distribution of the data together with duplicating the data means it is possible to have a node be offline while allowing for data to still be read from the other nodes. With availability taken care of, querying data that is stored in-memory then provides a more reliable and stable response times than reading data from disk.

Before diving further into the MySQL NDB Cluster architecture, it is worth considering the following graphical representation of a cluster: 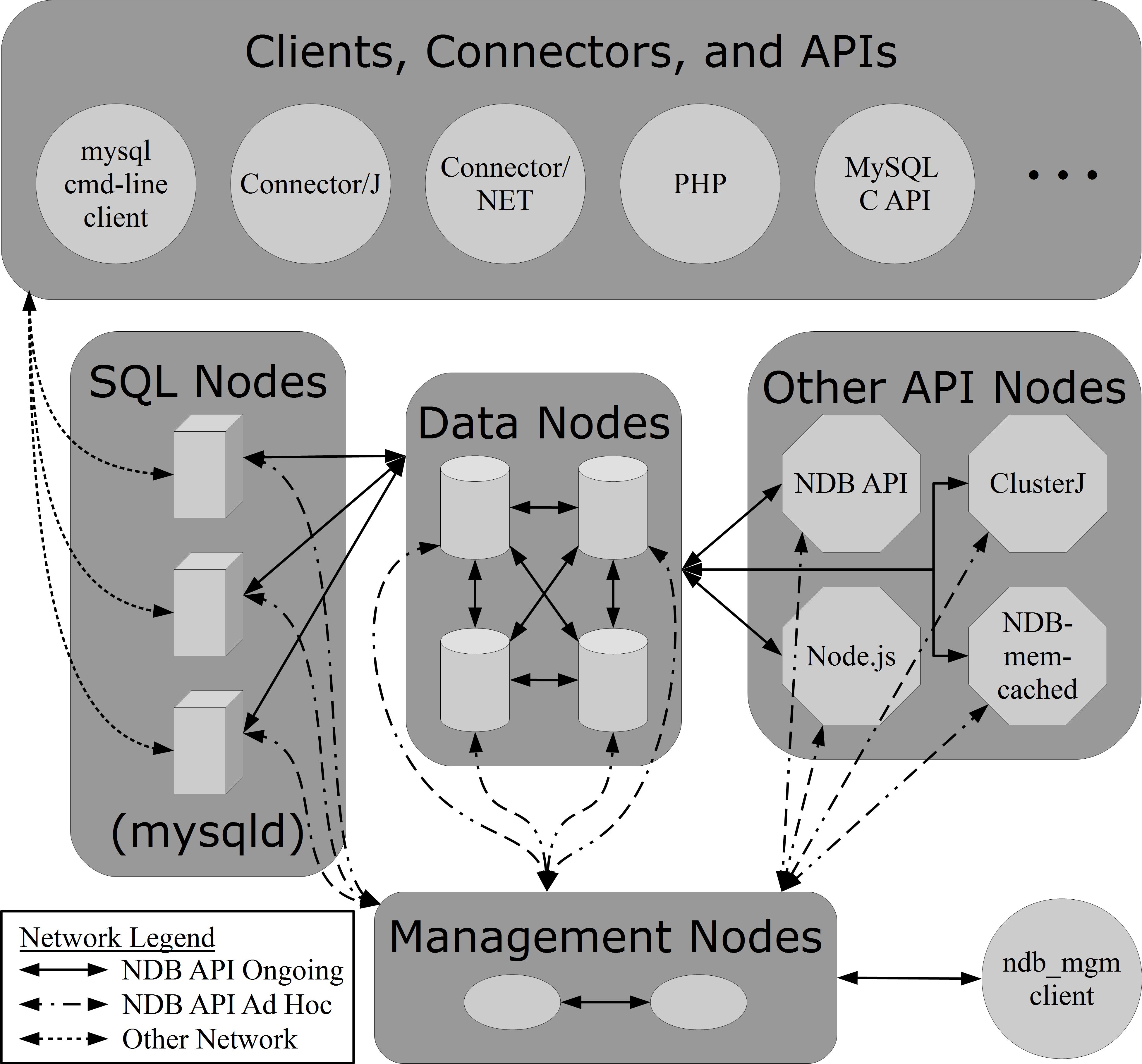 The core of the cluster is the data nodes. They are where data is stored and the main work of queries is done. There can be up to 48 data nodes, and the most common and recommended practice is to have two replicas (or copies) of the data. Data nodes that share the same data are said to belong to the same node group.

There are two main ways to execute queries in MySQL NDB Cluster:

Following are some key features and characteristics to be aware of now that you have sense of what NDB Cluster can deliver in terms of availability:

Jesper Wisborg Krogh is a member of the Oracle MySQL Support team and has spoken on several occasions at Oracle OpenWorld. He has a background with a Ph.D. in computational chemistry before changing to work with MySQL and other software development in 2006. Jesper lives in Sydney, Australia and enjoys spending time outdoors walking, traveling, and reading. His areas of expertise include MySQL Cluster, MySQL Enterprise Backup, and the Performance and sys schemas. He is an active author in the Oracle Knowledge Base, and regularly blogs on MySQL topics.